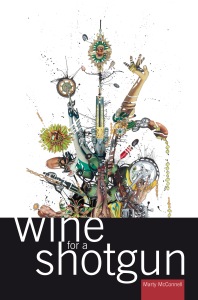 Marty McConnell is the author of wine for a shotgun, on EM Press. Part of the vanguard of poets fusing and refusing the delineations between literary and oral poetry, McConnell’s work additionally blurs the lines between autobiography and personae to comment on and illuminate what it means to live and love outside the lines in early 21st century America. McConnell’s work has been published in numerous anthologies, including A Face to Meet the Faces: An Anthology of Contemporary Persona Poetry, City of the Big Shoulders: An Anthology of Chicago Poetry, Word Warriors: 35 Women Leaders in the Spoken Word Movement, Spoken Word Revolution Redux, as well as journals including Gulf Coast, Indiana Review, Crab Orchard, Salt Hill Review, Beloit Poetry Journal, Drunken Boat, Muzzle Magazine, and more. A member of seven National Poetry Slam teams representing New York City and Chicago, McConnell is the 2012 National Underground Poetry Individual Competition (NUPIC) Champion. In 2011, she completed her first European tour and debuted her one-woman show, “vicebox.” She is a two-time recipient of the Community Arts Assistance Program grant from the City of Chicago’s Office of Tourism and Culture. McConnell transplanted herself from Chicago to New York City in 1999, after completing the first of three national tours with the Morrigan, an all-female performance poetry troupe she co-founded. She received her MFA in creative writing/poetry from Sarah Lawrence College, and for nearly a decade, co-curated the flagship reading series of the New York City-based louderARTS Project. She appeared on both the second and fifth seasons of HBO’s Def Poetry Jam. She returned to Chicago in 2009 to co-found Vox Ferus, an organiza- tion dedicated to empowering and energizing individuals and communities through the written and spoken word. She has performed and facilitated workshops at schools and festivals around the country, including The Dodge Poetry Festival, Palm Beach Poetry Festival, Wicker Park Arts Festival, Connecticut Poetry Festival, Cornell University, University of Utah, James Madison University, Old Dominion, University of Connecticut, University of Arkansas, DePaul University, and more. She lives in Chicago, and travels the country performing and leading workshops.

Praise for her new book, wine for a shotgun…

Marty McConnell is utterly fearless. She’ll tell you gentle truths with great lyric imagination and she’ll tell the harder truths with fire-hardened honesty rare in contemporary poetry. When I read these lines, “…I was struck still/ and wordless by the light…”, I was struck still, but not wordless: This is a brave and beautiful book and Marty McConnell has placed herself very firmly among the best poets of her (very talented) generation.

—Thomas Lux, director of the McEver Writers Program at Georgia Institute of Technology

Marty McConnell is a revelatory spirit, seemingly unaware of her absolute mastery of light and lyric and her enviable ability to sway her readers with a dizzying meld of grace, ferocity and staggering insight. This is revolutionary work—exquisitely crafted, with an addictive narrative flow that snares and enthralls. Once you’ve entered these pages, you will know where poetry is headed. And you will be changed.

Marty McConnell’s wine for a shotgun offers both argument and apologia addressed to the self and to a world presumed to be tragically deaf. That’s one reason “because” loops through this collection like a noose strung around the poet’s neck— around yours and mine, too—its end knot held tight in the speaker’s sweaty hands. The “ordinary” but secret “monster” staring back in this book’s mirror gives wine and shotgun blast to the “exploding bird” of the human heart. McConnell maps our aching hunt for an elusive “fidelity” whose smile shape shifts to grimace just before its toothy kiss.

I defy you to read the first three poems in wine for a shotgun and not want to hold Marty McConnell close, forever.